When he takes to the Liffey this weekend (1st September), Donnacha McCarthy from Drimoleague, Co Cork, will become the first registered blind person to compete in the Jones Engineering Dublin City Liffey Swim.

Donnacha will line out for the race accompanied by guide, David Tilley, to whom his leg will be tethered for the swim.

“Since I took up swimming a couple of years ago, says Donnacha. “I have been fascinated by the Liffey Swim, and it’s unique history. Having not heard of a person with vision impairment competing before, I was keen to show there are no barriers to blind people completing the swim.

“David (Tilley) and I have been training for the past seven months, in which we have developed a series of non-verbal, non-visual ways of communicating to ensure I do not veer off line and stick to the route of the race.” 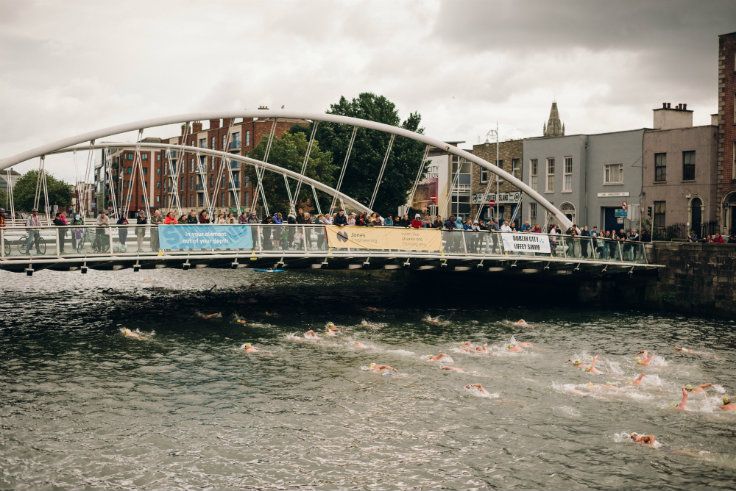 Donnacha is a member of the Ireland international five-a-side blind football team, which he captained to second place in IBSA European Football Challenge Cup in Poland in May.

Donnacha has not been found wanting in individual sports either. He recently became the Irish National Paratriathlon Champion when he won the VI Men’s Category at the Paratriathlon Irish National Championships in Belfast, and came third in the World Paratriathlon BI category, a week prior to that. His paratriathlon success is all the more impressive when you consider that he only learned to swim just over two years ago.

Donnacha’s major sporting goal at the moment is to compete in the Paratriathlon at the Paralympic Championships in Tokyo 2020. This event will comprise a 750m open water swim, 20km cycle and 5km run.

Following a serious illness, Donnacha suffered rapid loss of sight at age 10, which left him completely blind within a number of weeks. After losing his sight, playing football was one of the things Donnacha missed most. In his teens, he got involved in a blind version of the game, which was organised by Vision Sports Ireland (National Governing Body for Sport and Leisure Activities for Vision Impaired People).

Donnacha’s participation in the Jones Engineering Dublin City Liffey Swim is part of his preparations for Tokyo 2020, and part of another goal of his to show major sporting events can be accessible to people with visual impairment.

Donnacha is a member of the Markievicz Masters Swim Club, who he says are providing invaluable training and advice. He has also been facilitated by Vision Sports Ireland, who have provided him with a grant to facilitate his preparation as well as administrative support.

Our own Joe Geraghty says Donnacha is a unique athlete and a great ambassador for VI Sports. “Not only is he a dedicated multi-talented athlete, Donnacha has a very sharp sporting brain and an inert ability to focus on his sporting goals.”