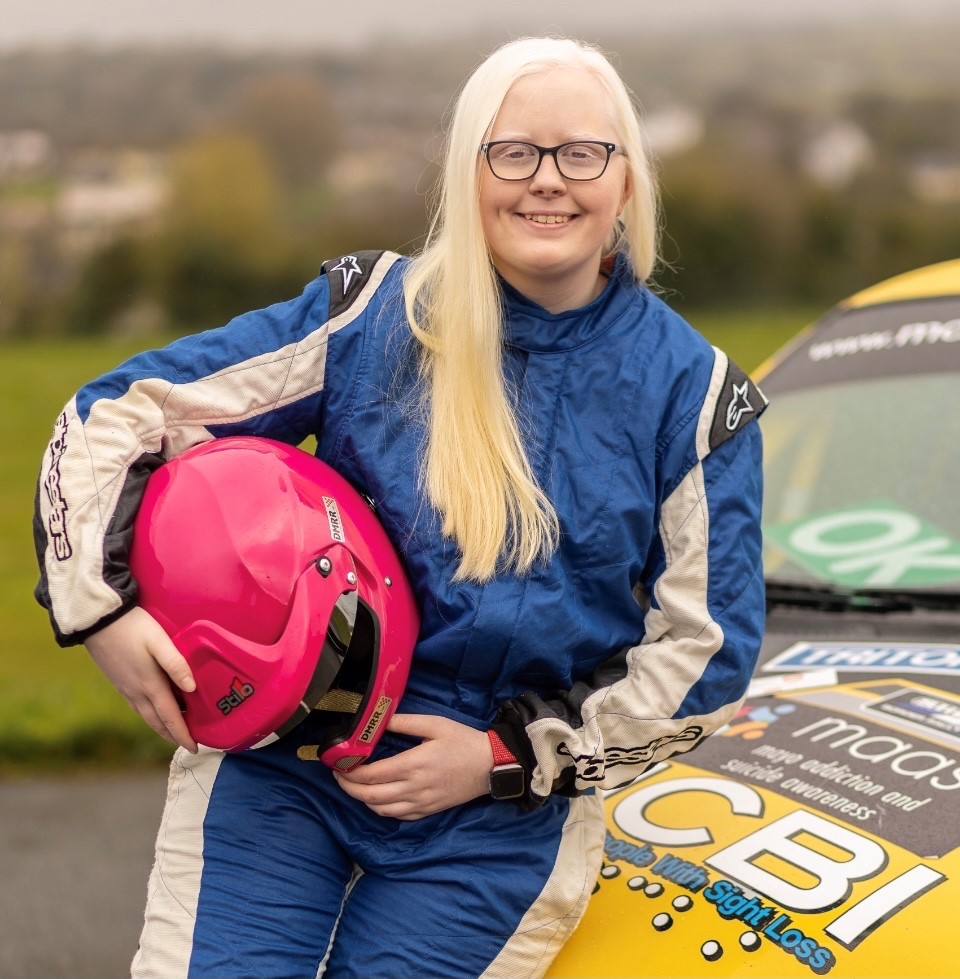 Next up for our Members Monday series, we caught up with visually impaired rally navigator Sara Mc Fadden.

Sara is a 20 year old final year college student from Castlebar, Co. Mayo and in July 2018 she became the first visually impaired person to compete in Irish Rallying.

2. How did you first get involved sport ?

I have been involved in many different sports form a very young age but I first got involved in rallying in 2018 when I was 17.

My parents have always been involved in Motorsport both as competitors and officials so naturally I was going to follow in their footsteps and my first event was the Imokilly Mini Stages Rally in Co. Cork. On that event the car actually broke down and we didn’t make it to the finish, but that only gave me the drive (pardon the pun) to do more and since that amazing day, I have gone from strength to strength getting the opportunity to rally all around Ireland.

3. What is it that you enjoy most about sports and physical activity?

I am probably the most competitive person you will ever meet so for me, sport offers me the opportunity to bring out my competitive side a little bit, I also really enjoy the social aspect of getting to meet people with the same interests.

4. Were you previously or are you still involved with any other sports?

Yes, growing up I played a lot of sport but camogie was always number one for me. An unusual sport for someone who is visually impaired but I was lucky enough to get to captain both my club and county at underage level.

At the moment as well as rallying I am also playing rugby, I play full contact rugby for IT Sligo and I am also lucky enough to have been involved in the pilot programme of Vision Impaired Rugby that was launched by Vision Sports Ireland and the IRFU this year. I really enjoy the vision impaired rugby and I would highly recommend anyone to get involved as it’s a great way to stay active and socialise with others in a fun environment.

5. What challenges and/or obstacles did you face, if any, getting involved in sport and leisure? (i.e. lack of awareness, volunteers, resources, choice of sport)

When you take part in mainstream sports with a vision impairment, you are always going to come across obstacles, but its all about finding a way that works for you to work around them. A great way to do this I always found is just being honest and keeping the communication open with your coaches and your teammates to let them know what you need them to do to help you.

6. What would you consider to be your biggest sporting achievement to date big or small?

This is a hard question to answer as over the last few years I have been very lucky to have a lot of achievements and awards to my name.

If I was to choose one stand out moment, it would possibly be at the end of the 2019 rally season when I was lucky enough to win the Motorsport Ireland J.C Millard Irish Clubman of the Year Award, this award was very special to me as my name is now on one of the most prestigious trophies in Irish motorsport beside some of Irish rallying’s best.

7. What piece of advice would you give to someone in the vision impaired community who would like to get involved in sports?

The best piece of advice I could give to someone who is considering getting involved in in sport or physical activity is to DO IT.

Rallying was my sport, everyone has something that they want to get involved in and you should let nothing stand in your way from achieving that and Vision Sports Ireland are a great support for anyone looking to get involved.

8. What athlete do you admire most and why?

In rallying I really look up to Rosemary Smith who we were lucky enough to have involved as a driver in our ZERO LIMITS Tack Day in September. She helped to pave the way for females like myself to compete in what was traditionally a very traditionally male dominated sport.

There are 2 visually impaired athletes that I have looked up to since I was a child.

The first is Jason Smyth. I have a really fond memory of watching Jason run the 100m in London 2012 with my mam and nanny and the screams when he crossed the line were probably heard in London. Jason in all his success helped to show that if you are determined enough you can achieve anything and is a role model for people everywhere.

For the other visually impaired athlete that I look up to I have to keep it in the family for this one, its my own cousin Kelly Gallagher. Kelly is a Visually Impaired, Paralympic Gold medallist alpine skier for team GB. I was blessed growing up to have a role model like Kelly, getting to watch one of your relatives compete in the Paralympics is a very special feeling, although I probably am a little glad that she chose to announce her retirement this year as I am not sure if my heart could take the stress of watching her compete in another paralympic games. My most memorable moment with Kelly would have to be her homecoming in 2014 when she returned with her gold medal form Sochi, we all were waiting in the airport for her to arrive and I will never forget the feeling that evening of getting to see a paralympic gold medal in person. Kelly helped me to realise that no matter the sport, if you want to do it you will find a way and I did just that.

9. Outside of sport what do you so in your leisure time?

I am currently a sports scholarship student in my final of IT Sligo, studying a Bachelor of Business (Honours) in Sport with Business so that takes up pretty much all my time at the moment but I am fond of a bit of Netflix to wind down.

Short and sweet, Sport means everything to me. Pretty much all aspects of my life revolve around sport and I don’t know what I would do without it.