Four time Paralympic gold medallist and World Champion, Jason Smyth, and Minister for Transport, Tourism & Sport, Leo Varadkar, launched Vision Sports Ireland (VSI) last month at a reception in central Dublin. Formerly Irish Blind Sports, the organisation has been renamed and rebranded to mark its 25th anniversary and to reflect the needs of its members. 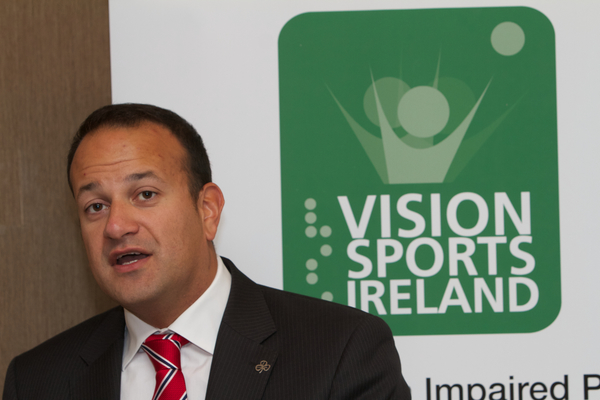 Speaking at the opening Minister Varadkar said: “This is the start of a new era for vision impaired sports people in Ireland and I congratulate Vision Sports Ireland for reaching out to the community. Sport can, and should, be open to everyone, and I know that this organisation is striving to provide access to activities right across the country. The Government continues to support this area and awarded €36,000 to Vision Sports Ireland through the Sports Council this year, in addition to support for elite athletes through Paralympics Ireland.” 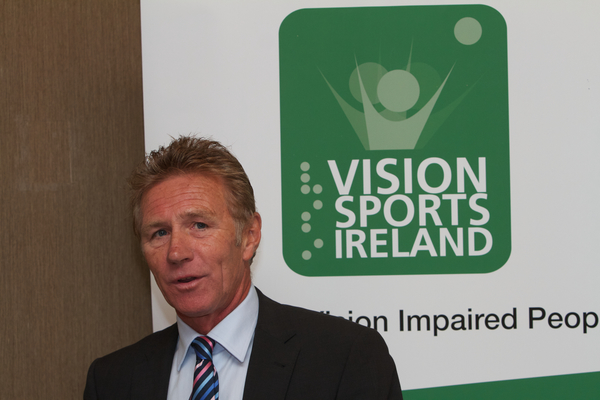 Vision Sports Ireland assists vision impaired people in Ireland, of all ages, to access sports at all levels, from leisure to elite, in their own communities where possible. The Organisation offers a range of sports, including tandem cycling, football, swimming, golf and athletics and hosts, both, national and international competitions.
Senator Eamonn Coghlan, a valued supporter of Vision Sports Ireland, former three time Olympian and World athletics 5000m champion, presided over the event declaring in his opening that “today is a great day for the vision impaired people of Ireland.” 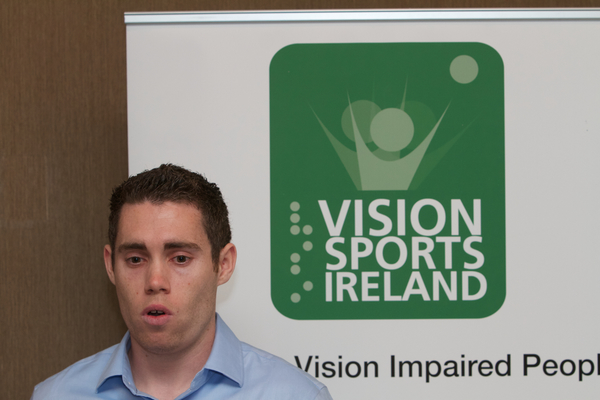 Jason Smyth, a long-time Vision Sports Ireland member, had broken from his training in the States to demonstrate his support for the Organisation and “to reach out to more of the vision impaired communiyty of Ireland.” Jason outlined his next goals as “making the Olympics in Rio and retaining the Paralympic titles at 100 meters.” He modestly describes himself as “an ordinary guy from Ireland who has been blessed with a talent and it is about improving on that talent and making the most of it.”
Jason retained his double Paralympic titles in the T13 100m and the T13 200m in London last year. He repeated the double at the World Championships in Lyon this year, setting a new championship record in the 100m.
At age 8 Jason (26) was diagnosed with Stargardt Disease which led to degeneration of his central vision to less than 10% eyesight. Always a sports lover Jason made the big switch from soccer to athletics at age 16. At just 22 years of age he won his first able bodied national title, the 2009 Athletics Ireland National 100m title. A year later he went on to become the first Paralympian to compete at IAAF European Athletics Championships.

In his closing remarks newly elected Chairperson of Vision Sports Ireland, Robert Dobbyn, paid tribute to Jason Smyth as ”an outstanding role model, an inspiration to all our members.” He sumarised the goal of the Organisation as achieving “greater participation by a greater number of members in a greater variety of sports.” Finally he encouraged their members “to, firstly, participate and get enjoyment from their chosen sport or leisure activity and secondly to set personal targets or maybe strive to be the Jason of that sport.”
watch our for our exclusive interview iwwth Jason Smyth – ‘Jason – should I stay or should I go’ comng soon ot this site.